Visions of the new economy movement are as diverse as the players involved in creating it. At TESA, we keep an open mind about the ideas, initiatives, and tactics employed to move us beyond capitalism. The task is too big for any one ideology or action plan and surprising, successful contributions come from all corners of the movement.

The new economy movement pools resources and distributes them more fairly, which gives everyone more opportunities and more control over their lives. It also has the potential for systemic change—it’s not merely redefining who can participate, but changing how they participate that matters. To put it simply, the new economy movement offers many different strategies for how we create the communities we live in, and the goal is to distribute decision-making power and ownership to everyone involved.

To TESA, this means four things:

We are inspired by that vision, it shares many values with the philosophy of democratic education that we use in our work. At TESA, we think democracy should be an everyday activity, that’s why we train our partners how to create democratic organizational structures and build participatory cultures.

The new economy movement has succeeded in modeling democratic control over finance through such initiatives as time banks and credit unions, and it has sprouted sustainable food systems in places where access to good food was scarce. It is fertile ground for innovation. Nonprofits, co-ops, and traditional businesses alike contribute ideas and action plans. We see a movement that is wide enough to include them all and stronger for their participation, and we work with organizations of all shapes and sizes.

The world we create should be a joyous one, and we try to model this belief in the tools we create to move us further toward our goal. Games reflect and produce meaning in our work but are also a way to ensure we’re building a culture that is fun and participatory—the blossoming side of bread and roses.

We’ve worked to realize these visions in many ways. Co-opoly: The Game of Cooperatives and Loud & Proud introduce fun and excitement to new economy organizing and political education. Cultivate.coop offers democratic workplaces and start-ups resources written by experienced activists. Our co-op academy curricula have helped launch many new businesses across the country. The variety of our work reflects the openness of our vision, and it’s our intention to do work that is inviting to all, including you. 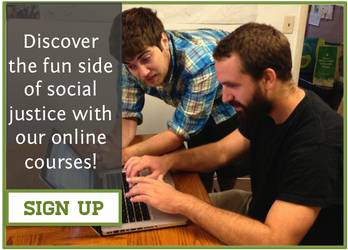