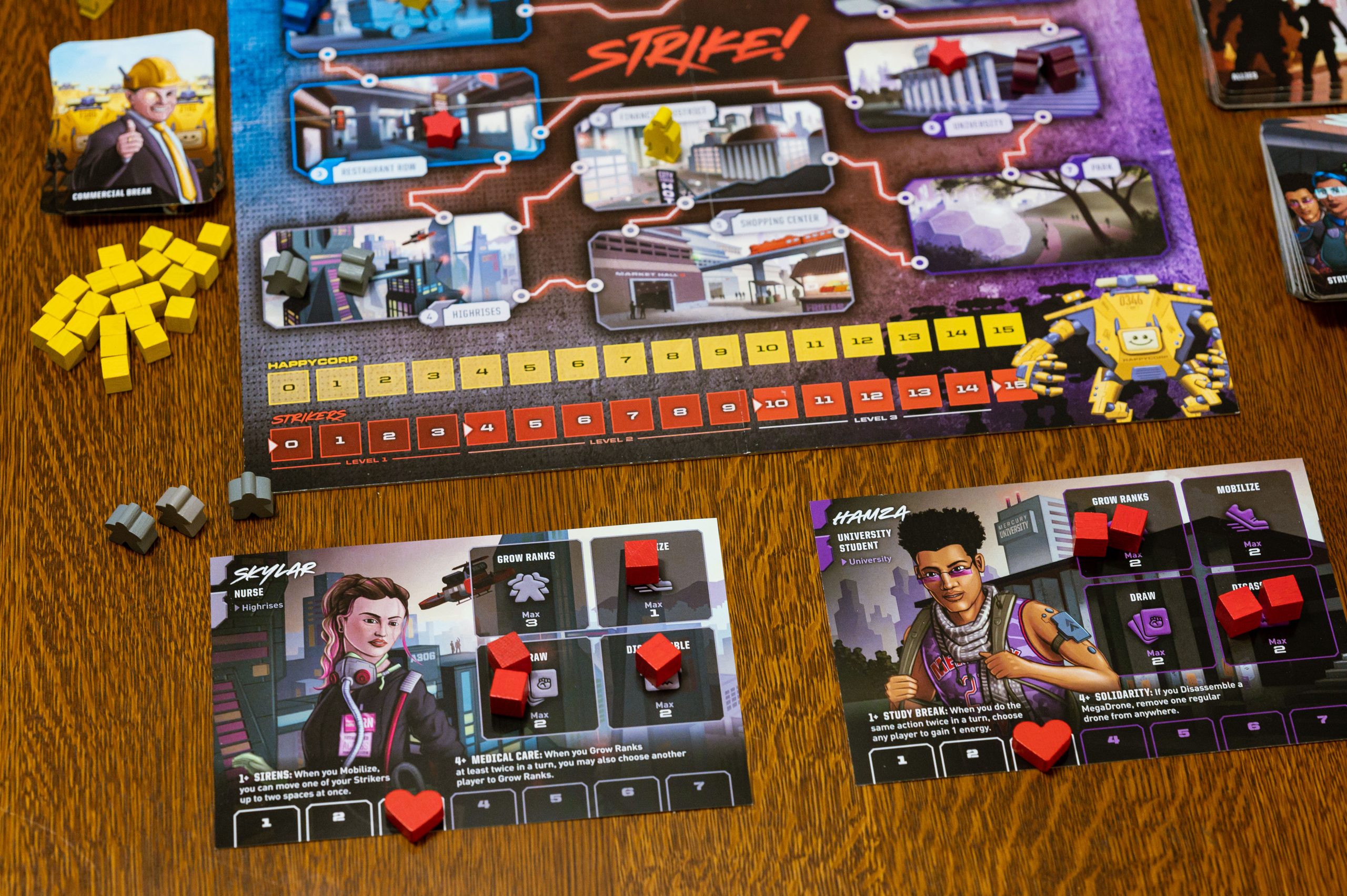 We at the TESA Collective are thrilled to release the fifth title in our suite of activist games: STRIKE! The Game of Worker Rebellion. STRIKE! is a groundbreaking and beautifully-illustrated cooperative board game for 2 – 4 players about building worker power. TESA’s previous games have been played in over 30 countries by more than 200,000 people. Our past titles include Space Cats Fight Fascism, Rise Up: The Game of People & Power, and Co-opoly: The Game of Cooperatives.

In STRIKE!, players lead a city-wide rebellion of workers against a mega-corporation’s attempt to take over their community. Players must grow their ranks, mobilize their workers, and organize strikes around their city. As the Strike Council scores victories for workers, they gain the support of more allies, from the dockworkers to the teachers, and build new bases of support from the manufacturing district to the university. It is a cooperative game – meaning all players win or lose together.

Like all of TESA’s previous games, STRIKE! was printed and assembled in the United States on sustainable materials. The only mass produced board game to take on this critical and timely topic, STRIKE! comes at a moment when people are reeling from the COVID-19 pandemic. All over the country, workers are organizing massive campaigns to protect their lives, livelihoods, and communities against some of the most powerful corporations on earth.

One of the things we at TESA are most proud about STRIKE! is that this game was created in a close collaboration with those at the forefront of the labor movement – specifically, Jobs with Justice (JWJ).

At Jobs With Justice, we are leading the fight for workers’ rights and an economy that benefits everyone. We are the only nonprofit of our kind leading strategic campaigns and shaping the public discourse on every front to build power for working people. Jobs With Justice is committed to working nationally and locally, on the ground and online. We win real change for workers by combining innovative communications strategies and solid research and policy advocacy with grassroots action and mobilization.

The idea for STRIKE! was born out of conversations between TESA and Jobs with Justice. For over a year, TESA and JWJ collaborated on every step of the game, from the conceptual ideas, to the world building, the game design, and playtesting. Together, we designed STRIKE! to be a game about, by, and for the labor movement.

Here’s what Erica Smiley, Executive Director of Jobs with Justice, had to say about our work together and the game we created:

Jobs With Justice is thrilled to partner with the TESA Collective on STRIKE!. The game is innovative, thrilling, and a great example of what working people can accomplish when they join together. What I love about STRIKE! is that it is more than a game. Bringing people together to strategize on building a worker rebellion is critical for our time. We look forward to having STRIKE! fans joining us in the streets and stopping corporate greed in their communities. We can’t wait to hear how players are inspired by the game, and we want all the players to know Jobs With Justice will always have a place for them at our table.

TESA both makes our own games about changing the world, which we sell and distribute, and we also partner with other organizations, such as The Nature Conservancy, to build games for their causes – which they use in their campaigns and programs. When we first began conversations around making a game together, Jobs with Justice wanted to merge those approaches in order to take on a culture change initiative: thus, our goal was to make a fun game about building the labor movement that saw wide release through TESA’s distribution network. The purpose would be to engage activists and game players alike in the message of worker power through fun, play, and imagination. So in 2019, TESA and JWJ began working on the initial concepts for the game, exploring questions such as: did we want the game set in the real world or a slightly fictionalized one? Did we want the game to be cooperative (all players on the same team) or competitive? What feelings did we want players to have as they played as well as when they finished the game? Eventually, TESA also brought on artist T.L. Simons to help with the game’s world building and its stunning visual and artistic design. The process of illustrating one of the playable characters in STRIKE!. Credit to artist T.L. Simons.

After the concept phase, TESA launched into a rapid prototyping process for creating and testing the gameplay. We came up with initial versions of the game, and then tested them with labor activists and game enthusiasts alike, ensuring that STRIKE! was both a fun game to play while effectively telling the story of worker power and solidarity. Though we were in different cities, JWJ staff and TESA arranged numerous video playtests to ensure the JWJ team had opportunities to give feedback and guidance on the game’s story, message, content, and gameplay. A snapshot from a playtest of an early version of STRIKE! that TESA ran with some JWJ staff over video chat.

Then, from October 21 – November 21 of 2019, TESA and JWJ worked together to launch and run a crowdfunding campaign for the game on Kickstarter in order to raise the funds to produce it. The campaign raised roughly $46,000 from nearly 800 people. This came at a time when Kickstarter workers themselves were fighting for – and eventually won – a union, which TESA and JWJ used their campaign to advocate for.

Following the successful crowdfunding campaign, STRIKE! was scheduled to finish production and begin shipping at the end of March. However, the release of STRIKE! was delayed due to the onset of the COVID-19 pandemic. For more than a decade, TESA has been a leader in ethical, domestic, and sustainable manufacturing of board games. And we knew that in this case, in order to uphold these values during the pandemic, we had to fully support the safety and health of the workers making the game – which included pausing the game’s production. At the end of June, production resumed on STRIKE! once it was deemed it was safe enough to do so – while enacting additional safety measures, social distancing practices, and so forth.

Now, we have finished copies of STRIKE! in hand, and we have begun shipping it out to everyone who helped make the game possible by supporting its crowdfunding campaign, as well as those who pre-ordered it.

Throughout the entire process, we were honored and thrilled to work with Jobs with Justice, an organization truly committed to building the power of working people as well as bringing about social and economic change. They were incredible partners in the process, every step of the way. And here’s what Brenden Sloan, Development Director of Jobs with Justice, had to say about working with TESA:

TESA was truly a pleasure to work with from start to finish. Before we even began the process, they knew so much about our power analysis and the change we’re trying to effect in the world. That made creating a game with them so much easier. Their creativity knows no bounds, and they even went above and beyond to help strategize how we could best use this game for our own organizing purposes. We look forward to continuing to work with them, as well as recommend them to other partners!

Because of Jobs with Justice’s vision to make this game widely available to the public through TESA, we will be able to continue distributing the game for years to come. Already, roughly 1,000 copies of the game have shipped out across the United States and even the world. We’re so excited with how STRIKE! turned out, and we believe it truly tells the story of building the movement for worker power while being a fun and strategic game. The final box design for STRIKE! The Game of Worker Rebellion.

STRIKE! The Game of Worker Rebellion can be purchased here.