Not every board game is about fighting wars or ripping off your friends. There are games out there that are about changing the world – including the six below that we made! If you want your game night to reflect your values, these games will make people laugh, think, and strategize together about how we can build something better.

STRIKE! The Game of Worker Rebellion is a strategic, cooperative, and beautifully-illustrated board game for 2 – 4 players about building a city-wide rebellion to stop a mega-corporation’s takeover. 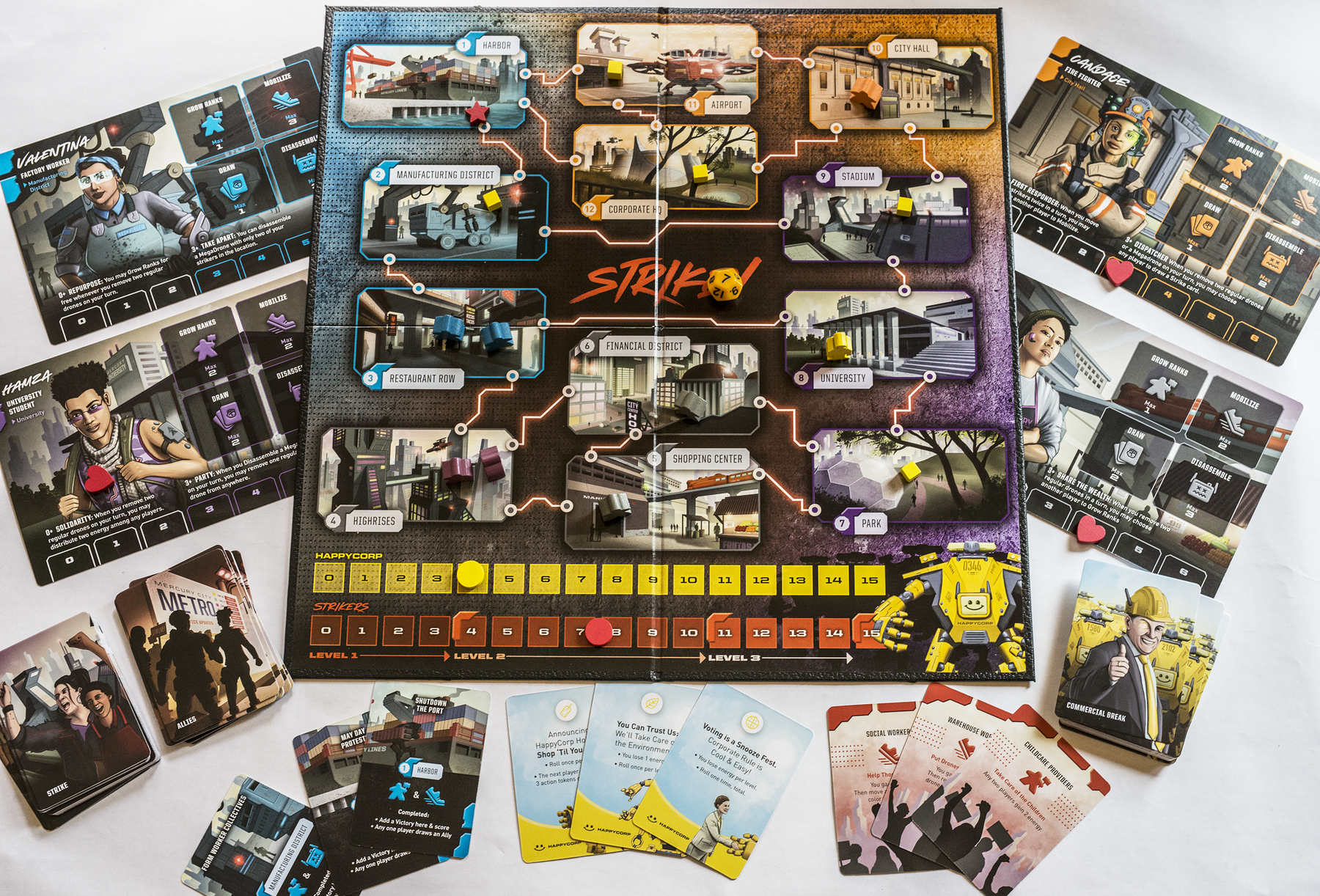 HappyCorp, the richest company in the world, has just unleashed its most diabolical plan yet: turning Mercury City into an entirely corporate-run metropolis. From the schools to the sidewalks, everything will be owned and run by HappyCorp, and every resident will become a HappyCorp employee.  Players take on the role of the Strike Council to lead a city-wide rebellion against HappyCorp’s takeover, while also fighting for better livelihoods for all. Players will grow their ranks, mobilize their workers, and lead strikes around Mercury City. As the Strike Council scores victories for workers, they will gain the support of more allies, from the steelworkers to the teachers, and build new bases of support from the manufacturing district to the university.

STRIKE! was created in a collaboration with Jobs with Justice, a leading labor rights organization.

Here’s what people are saying about STRIKE!:

“Overall, I think Strike! works well both as a cooperative game with a hint of a sci-fi theme, and as a conversation starter about the labor movement. It feels like there are plenty of games in which players are the corporations, maximizing profits and exploiting resources and labor, but not many that take the worker’s perspective into account. Strike! is a rare exception to that rule, and is worth checking out, especially if you like the theme.”

“STRIKE! The Game of Worker Rebellion is fast-paced, it’s tons of fun, and it raises awareness about the value of worker solidarity and collective action. What’s not to love?”

Rise Up: The Game of People & Power is the game about fighting for what you believe in. At the start of each game, players come up with any movement they want to build, and then the story of their movement unfolds as they play. Using cards like “Massive March,” “Protest Song,” and “Building Community,” players will launch a campaign to bring about the change they want to see in the world. Rise Up is a cooperative game, meaning all players are on the same team trying to beat the game itself. 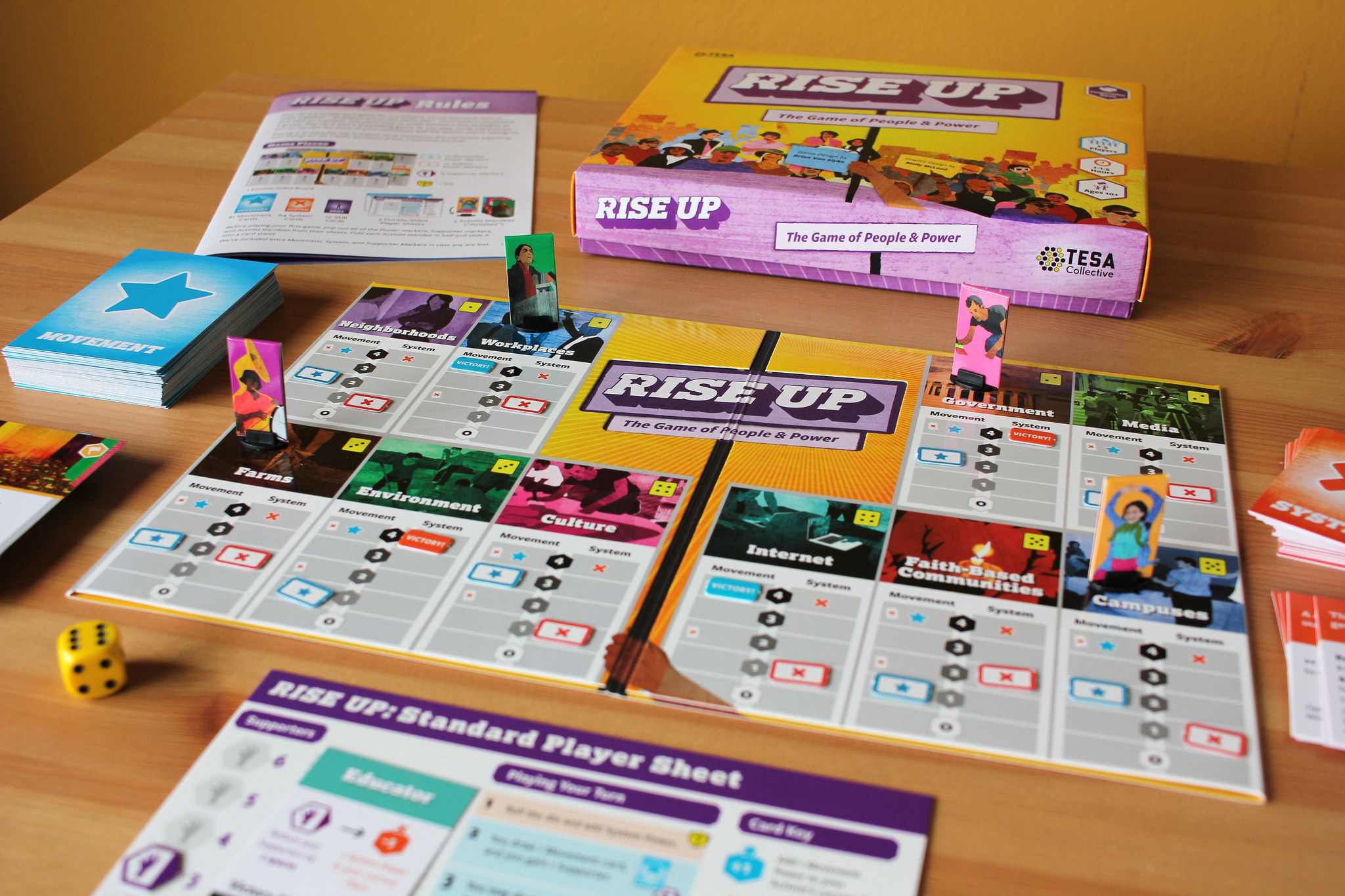 But watch out, because the game is fighting back. With cards like “Smear Campaign,” “Infighting,” and “Corrupt Politician,” the game will oppose players at every turn. Collaborating is the only way players can overcome all of the hurdles the game throws at them.

Here’s what people are saying about Rise Up: The Game of People & Power.

“Rise Up is a blast for the gameplay alone. The cooperative element added a layer of novelty for even this hardened gamer nerd — it takes a lot of group strategizing to beat The System! But the icing on the cake is the opportunity for activists to both poke fun at ourselves and engage with real tactical questions.”

“I train organizers for a living, and what’s impressive to me about Rise Up is how closely the play of the game reflects the kind of situations that organizers encounter in real life.  It’s great practice for those who organize professionally, and great fun for those who don’t.”

“Rise Up is innovative and timely… it’s truly phenomenal.”

On top of all of that, Rise Up comes with two versions in the box. The main version of the game is great for a game night with people who like strategy games. But just flip the board over, and you’ve got a simplified version that’s meant for younger kids and educational settings.

Yup. Cats. In space. Fighting fascism. Space Cats Fight Fascism is exactly what it sounds like. If you want to talk about changing the world (or the galaxy, really), but the news is feeling too overwhelming, try this game. Space Cats Fight Fascism takes on a serious subject through a silly lens. In this game, it’s the year three million, and a group known as The Rat Pack is on the rise, trying to put the galaxy under autocratic rule. But as everyone knows, cats don’t like to be caged, and they don’t like to be collared. So the feline rebellion begins. Together, you must stop the fascist rats from seizing power – while building a new galaxy where all animals are free together. Space Cats Fight Fascism is a game like no other.

Since it first came out in 2011, Co-opoly: The Game of Cooperatives has become the game of the cooperative movement. A cooperative is a business or organization that is democratically owned and run by a certain group of people, like the consumers, or the workers, and so on. Co-ops are a powerful way to build a resilient economy and more just communities.

Also, did we mention Co-opoly is a ton of fun? In the game, players have to work together to launch a cooperative. They must also take on the Point Bank, which will oppose them all along the way. The game is full of high-fives, laughs, and heart-pounding fun.

Co-opoly has even been featured in magazines and newspapers like The Guardian, YES! Magazine, and more. Here’s what The Guardian had to say about the game:

‘And what did the teams playing Co-opoly think of it?

Nisha who had been playing with her two young boys, Ishan 8 and Ravi 11, was full of praise: “My two boys are normally very competitive all the time but the game made them listen to each other and work things out together,” says Nisha. “It wasn’t about winning individually it was about everyone winning, something that I think was really good for them to learn.”

Ishan was equally keen: “It helps you understand that everything doesn’t have to be about winning or losing, it’s about working together.”

Co-opoly is a great choice for game nights as well as people who want to learn more about the world of co-ops.

For a change of pace, check out Loud & Proud – the fast paced social justice word game! The rules are quick to learn, and the gameplay is speedy. Players face off in a circle, taking turns flipping over cards with different words and phrases. If the symbol on your card matches another player’s symbol, you face-off, and rush to answer each others’ card prompt first. Your card might say “Civil Rights Leader,” and their card might say “Renewable Energy”—the first player to correctly answer the other player’s prompt (“Rosa Parks!” or “Wind!”) wins the card.

But there’s some twists and turns: A few cards force all players to give an answer at once or provide not just one, but three answers! What ensues is shouting, laughing, high-fives, and the opportunity for important conversations.

Loud & Proud has a ton of replay value, and it creates a fun, raucous, and insightful time for everyone.

So now that you know about these games, what are you waiting for? It’s time to get a game night together!